-someone filled Abba’s, my father’s hookah during the daawat of his recent wedding. When he inhaled, it sounded like the hiss of the wind in the valley, the sound that kept my mother awake at nights, and her guilt of not being able to give him a son. The house smelled dense with fresh mutton, Abba’s favorite but oldest goat, Mustafa’s head lying in the corner of the verandah, eyes wide.

Abba’s new bride, Shabnam, my age, yawned, raised her arms, her skin glossy like a plastic doll, a slim line of her hair running from her navel to her salwar. The men surrounding Abba, glanced at Shabnam’s flat waist, the tight bud of her navel. Horrified, my mother ran to her, “Ya Allah, besharam.” Abba cleared his throat, raised his hand. My mother halted. In the background, the folk song sounded like weeping, an old relative prayer-drifting through the rosary, blessing the new couple, “Shabnam Salamat, Rafiq Salamat”.

-on my bed, my mother cried for hours as if she borrowed the rain. Spread eagled on a diwan in his sherwani, Abba watched the news on the TV, his dark-circled, rheumed eyes opened and closed like a carnivorous flower.

Shabnam dragged her red suitcase into Abba’s and my mother’s bedroom. “Chudail,” my mother spat, lined curses between the kitchen and the bedroom that drowned in the sound of the blaring news. Thinking of my father with a young girl I felt a hot knot under my tongue, the back of my throat hitching.

-during the power cuts, my mother and I spent our evenings in the kitchen, dressed in sweat-soaked phirans, listening to Abba’s and Shabnam’s moans. At this hour, the front yard was a labyrinth of fireflies, their paths electric, a fanfare. When the lights came on the sparkle in the air reduced to ugly bugs, shivering, mating with their wiry legs and antenna.

One morning my mother summoned Shabnam to hand over her jewelry, the cheap imitation of Pashmina shawls, her glittery phiran.

“This is for your Nikah.” My mother glared at me.

“I told you not to agree for his second wedding,” I yelled.

“If only you were a boy,” she clenched her teeth, the satin salwars and chiffon dupattas between her arms and chest, about to fall.

-in the only ladies salon in our town, I watched the beautician waxing Shabnam’s limbs until she pulled the curtain for bikini wax. “No hair, he wants no hair,” Shabnam whispered amidst her muffled screams. I wondered if silking the pubes guaranteed a boy, what if Shabnam delivered a girl.

On our way back, Shabnam kneeled on the dusty sidewalk, puked kebabs and rice, my mother’s curses and disdain. She puked Abba’s cough, his outdated lust. I helped her get to her feet.

“I crave a sugared lemon,” she said, her face bleached, translucent with sweat, an acidic cloud that drifted from her mouth to my nostrils turning my face away.

The pre-monsoon heat swept us. Abba’s knees sore on the prayer mat, his hands wobbly in the air-Allah, the sun, the moon, the cosmos, Shabnam Salamat, in that order.

My mother prepared paneer chaman, rogan josh, khatte baigan. Nothing stayed in Shabnam’s belly except cramps, her fingers pressing a slight bump below her navel.

-the rain hollowed the ground, leaked through the ceiling. The valley whirled with clouds, like a stomach turning, the sunlight distant and diffused. My head spun with the rot of Shabnam’s frequent retching, so I carried a burning incense stick wherever I went.

When Shabnam miscarried, her wails gored the night. Abba stared at her as if saying, Stop crying with those stupid eyes. Stop screaming. My mother and I washed the floors, slurred the blood into the drain. Pinned bleached sheets and mourning on the clothesline. My mother brought clairvoyants, hakims: they claimed that Shabnam’s womb wasn’t set correct, never would be.

-the rumor rose – Abba was looking to get married again. He rattled the television set all day, but the screen stayed black. He concluded water puddled inside, ruined its wiring. Shabnam stayed in the bedroom, a ransacked space, a slow river of tears in her cupped palms.  Occasionally, she walked out into the verandah, her hand over her belly as if her fetus were still bobbing in it. My mother uncoiled Shabnam’s braids, oiled and massaged her scalp. From a distance they looked similar with light salting their face, keeping their grief lit. 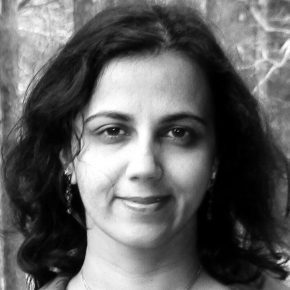 Tara Isabel Zambrano is the author of Death, Desire And Other Destinations, a full-length flash collection by OKAY Donkey Press. Her work has won the first prize in The Southampton Review Short Short Fiction Contest 2019, a second prize in Bath Flash Award 2020, been a Finalist in Bat City Review 2018 Short Prose Contest and Mid-American Review Fineline 2018 Contest. She lives in Texas and is the Fiction Editor for Waxwing Literary Journal.