for what would this life
be, if
at last
we could name our desires
hear the chorus of the disappeared

indeed, what would this life
be, if
the dead
were no longer
entrusted
to
commissioned truths,
the angel of history
learned to
sing
her sad song
in K’iche’

a tombstone that reads: k’ixibal

* Housed at Fort Benning, Georgia, the benignly named “School of the Americas” has trained some of Latin America’s worst human rights violators, not least those military officers who oversaw the “silent Holocaust” of tens of thousands of indigenous Guatemalans in the early 1980s. K’ixibal means “shame” in K’iche’, a Maya language of the K’iche’ people of Guatemala’s central highlands. 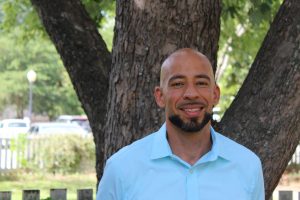 Born in Puerto Rico, Eric Morales-Franceschini is a former day laborer, U.S. Army veteran, and community college grad who now holds a PhD from UC, Berkeley and is Assistant Professor of English and Latin American Studies at the University of Georgia. His scholarly works have been published or are forthcoming at Global South Studies, Journal of Postcolonial Writing, Centro, Comparative Literature; his poetry and film reviews at Tropics of Meta, The Rumpus, Newfound, Boston Review; and his poetry at Somos en escrito, Moko, Chiricú, Dryland, and Acentos Review.