Is it just me, or do sunsets feel more battered
these days? Too many crimsons and violent
pinks to count, like a twilight train plowing
into a herd of cows. Everything sad,
haven’t you noticed, even rainy worms writhing
like Ophelia instead of welcoming the wet.
As for maple saplings in wind—why feel sorry
for them? But I do. No one but me
to watch them toss their green hair around
like spurned show girls. On Columbus Day
to boot. Which reminds me: poor, poor 1492.
Other things must have happened that year,
a delicious spike in bubonic deaths,
or an angel, light as Baryshnikov, making
an appearance in some peasant’s smelly stable.
Not a whisper in the history books.
Just Columbus this and Columbus that.
And don’t forget our suffering stars.
Can’t we cobble together a new myth or two?
Out with Pisces. In with Crocodile Boy,
Grocery Cart of the Antipodes, Waterfall
of Flaming Brides. Which brings me
to the mouthfuls of air I take in. Given a choice,
wouldn’t air prefer a stint in Antarctica,
keeping penguins frisky and caressing a blue
glacier about to calve? Even our faithful
hands are slaves. Always dotting i’s or adjusting
the thermostat. Shouldn’t we just snap
them off at the wrist and nudge them
into flight. Go, overworked friends!
Settle someplace chill, like the cemetery,
no plates to stack, no drains to snake,
the company stiff but stable. Time to snail
across a gravestone for the hell of it, or pause
to scratch a pooch who has mistaken these
rolling fields of the dead for a good place to nap. 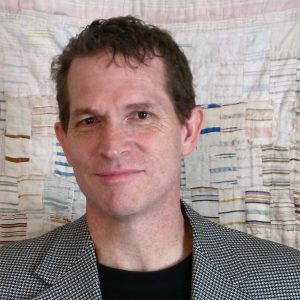 Lance Larsen has published five poetry collections, most recently What the Body Knows (Tampa 2018). He has received a Pushcart Prize and an NEA fellowship. He teaches at BYU, where he serves as department chair and fools around with aphorisms: “When climbing a new mountain, wear old shoes.” In 2017 he completed a five-year term as poet laureate of Utah.