Her scales are the size of silver dollars. Her green hair mystically covers her breasts. Water drips from her fin and turns into pearls that she strings with the thread of her hair. Her pinky nail is the needle. She sits on a rock in the middle of the night, waiting for the boats full of men.

Her neck and arms are strung with jewelry. The men come with their pockets full of gold. They want her pearls for their wives because the pearls make them glow.

“It’s almost as if my wife were young again,” one sailor tells her.

One by one the men come to her rock, and she gives them a bracelet, a necklace, or a small ring.

They always kiss her first, right on her peach lips. Their rough hands run over her shoulders, then part her hair.

“Your breasts feel like down pillows,” one says while he squeezes. “I want to sleep on them.”

Most of the men stop above the waist, because there is nothing to touch below but a slimy tail. They take her pearls to their wives and make love to them instead.

She listens to the ocean’s shhhhh sound. She watches the waves hit the shore and wonders what it’s like to have legs. What does sand feel like on toes? But mostly she wonders about the ice cream stand near the pier and the man who runs it.

He is dressed all in white, smiling when he hands customers a cone. His teeth probably don’t have holes in them like the sailors do—no gold caps or large spaces in between. She wonders what his mouth tastes like, if it is different from the sailors’ rotten fish scent. She likes the man because his belly pokes out from his shirt and his arms remind her of jelly fish when he thrusts the scoop into the bucket of ice cream.

He seems soft, she thinks.

She leaves her rock and splashes back into the ocean, her mind on the ice cream man, her mind on legs. Instead of going home, near her sisters, near her father, she goes to the sea witch’s cave.

“I’ll need nine of your scales,” the sea witch hisses. “Magick has a price.”

The mermaid agrees. She flinches with each pluck and hands nine scales to the sea witch who then plops the scales into a glass bottle and mixes them with the blood of her finger. A small ring from the missing scales is now visible on the hip of the mermaid’s tail, branded forever by the sea witch and her magick.

The little mermaid drinks the potion.

She swims up to the surface, to an empty part of the beach, and lies in the sand. The hot sun dries her hair, her skin, her tail. Her scales flake and fall, leaving raw flesh. A sharp pain as her tail rips into two. She screams while her split fin turns into feet with toes. It feels like someone is carving them with a knife.

She stands and wobbles, nude. Her torso and arms are a deep tan while her legs are pale and blotchy-red. She looks towards the pier, sees the man near the ice cream cart and walks towards him. Everyone is staring at her. Parents put their hands over their children’s eyes; fathers stare and mothers, too. All look at the limping naked woman with green hair.

The ice cream man in mid-scoop stops to take her in. He sucks in his breath and holds out one strawberry cone. She has only ever eaten seaweed and fish; she wants to try the ball of pink that sparkles in the sun.

“Give me that,” she says. And she snatches it away.

She winces from the cold as she bites into it. The ice cream man, whose nametag says Gary, takes off his work shirt and drapes it around her small frame.

He brings her behind the cart, behind the bushes into a secluded grassy area with a dome roof of leaves. She chews the cone until it’s gone; she licks her sticky fingers while he unbuckles his belt and drops his pants.

“Please lie down,” he says.

“Because I love you,” he says.

He starts poking inside of her. The sweat drips from his face and into her eyes and from her eyes fall pearls and she is surprised by how much of her is still mermaid. His gut presses into her and she can’t breathe. She wants him to stop—she doesn’t like love after all—but his eyes are closed and she can sense that his mind is in a different world, a floating world; he’s floating inside of her.

When he finishes, she screeches so loud that Gary’s ears bleed. She walks him home afterwards.

She asks him for his ice cream cart and his uniform and his nametag and he gives it all to her. His thoughts unconsciously project to her how he messed things up so badly and he’s scared she’ll scream again. He even gives her enough money to stay at a hotel for the week until she can find a place.

She works the ice cream cart and finds a one-room house nearby. Her white uniform has strawberry, chocolate, and mint-chip stains. She wears Gary’s nametag and eats ice cream at least three times a day. Her belly swells up with a child who constantly kicks her while she eats. Her butt and thighs have thickened so much that no one looks at her anymore, and she likes it. She has given up on men loving her and instead loves her ice cream cart, the ice cream itself, and reading the minds of her customers before they can even order. Vanilla, she will hear, from the little human girl’s thoughts. Chocolate for the woman with the blood collecting between her legs. Strawberry, the men always get strawberry, and lick it like they are licking their wife when they used to love each other.

She gazes out onto the ocean and briefly wonders where the sailors are. Her thoughts drift to how life is in the sea without her, her family, her home.

Suddenly, her sisters’ heads pop up from the water. The little mermaid walks as fast as she can down to the beach to meet them there. As she nears them, she notices her youngest sister’s eyes have been plucked.

“What for?” the little mermaid asks.

Her oldest sister holds up a conch with purple blood.

“We killed the sea witch,” the second eldest sister says.

“After she took my eyes,” the youngest says.

“We took her blood,” says the oldest.

“You can have your tail back, your mermaid life back,” the second eldest says.

The conch rests in the crevice of a rock, the water swishing around it. The little mermaid looks up to a flock of birds circling in the sky and how their wings flap, mimicking the shimmer of fish scales in the sunlight.

She picks up the conch. It is heavy in her plump hands. She holds the sharp point of the shell to her lips and lets the thick blood pour into her mouth. The blood burns her tongue like hot soup, sears its way down her throat, and when she glances down at the boiling in her belly, her stomach is flat as if her child had never existed.

Her clothing disintegrates in the air. The fat in her arms shrinks, leaving two slender limbs. Her hair springs into its loose curls; the pale green hue is now a bright teal. Her breasts are perky again. The silhouette of her legs from a distance becomes the sleek tail and full bottom that she once had before coming to the sea witch’s cave. The bare ring of missing scales on her hip, the sea witch’s mark, is gone.

The little mermaid, with the blood still on her lips kisses her youngest sister’s wounds. Her sister opens her emerald eyes once more. One by one the three sisters screech in joy and return back to the ocean.

The little mermaid hovers from a rock overlooking the water. The waves are small and calm. She takes one last glance at the sun setting over the horizon. The pink, orange, and yellow hues remind her of the sorbet that she ate every morning when she was nauseous from her pregnancy.

She sings from her rock as the sun sets and the moon rises looking like a white pupil in the night sky. On the white dome she imagines the thin skin of a mermaid’s purse. The shadow of a yoke being sucked on by a wiggling merchild with a perfect split fin tail. The ocean waves slap the rock she sings from.

The little mermaid dives back into the ocean, back home. Tomorrow, she will sing again. 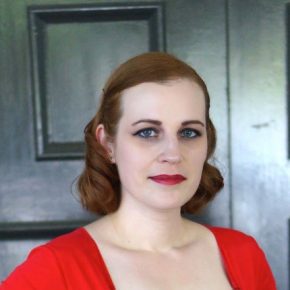 Jennifer Lorene Ritenour is from San Pedro, California and has lived in Las Vegas, Nevada. Her writing is informed by place. Her style has been described as dirty fabulism. Her work has appeared in the Santa Monica Review, Waxwing, and Writing Disorder among other places.