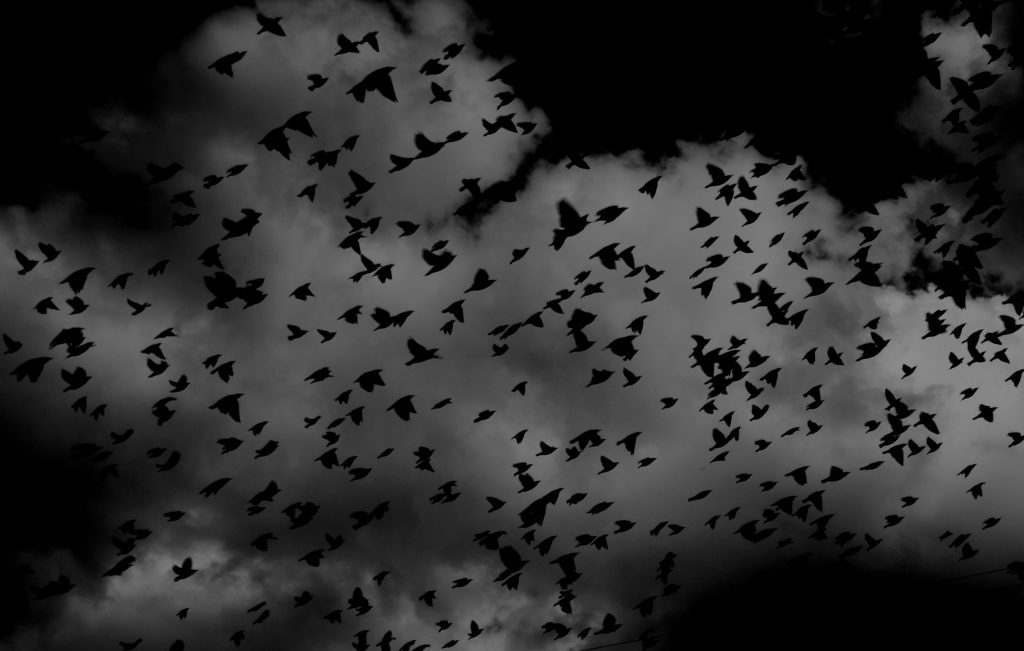 It’s a late night in the commuter lot along Route 10. The cold moon and the fluorescent lights paint our faces dead blue. We crowd the beds of pickup trucks with crocheted blankets on our laps. We pass around herby joints and glistening liquor bottles. My best friends wear Santa hats and snowflake earrings. We smell like campfires and Christmas cookies and fruity vodka. A missing poster of that girl from the next town over is tacked onto the telephone pole.  Wind rustles the edges of the poster. Something’s not right.

Everyone’s hanging out tonight, talking about how she was found. They gossip over Pearl Jam and Stone Temple Pilots blasting from truck speakers. My best friends tell me not to worry, forget about it, it’s some asshole messing around. But I can’t forget about it because of  the similarities.

Route 10 is a busy country road cutting this small northeastern town in half. I watch the salted road and wonder who he is, where he is, what he’s going to do. Maybe he’s a stranger. Maybe he’s from here.

The sergeant patrols more often  since the missing girl. He checks the lot aglow with red tail lights, burning cigarettes, and bright green dashboards— making sure everyone’s okay. Everything’s fine, sir. No, sir. Yes, sir. Have a good night, sir.  Then he stops across the way at the pizza shop for  salami grinders and  returns home to his wife.

Before going out, my dad had on the local news, and the pale face of that missing girl flashed across the screen. The resemblance is unsettling: black hair, cobalt eyes, fair skin, sophomore too. My best friends say it’s unrelated, but the way my dad stared at me  has left  me uneasy: “Be careful tonight.” And he doesn’t even know everything that’s going on: the notes, the phone calls. If he knew, he’d lock me away. Maybe my friends are right—it’s unrelated, it’s nothing.

My friends know about the phone calls and  notes. They don’t know about the truck. The dark one. Maybe black. Maybe midnight blue. Maybe evergreen. Last night around two a.m., I sat up in bed, jolted awake by a dread I couldn’t name. Headlights flicked on and a column of light covered  my pink comforter. This is when I hid behind the curtain—to watch him.

All I know is that he drives a truck. He comes at night. He parks by my house. He smokes.  The cigarette’s atomic glow burns against the  black forest. There’s a low rumble, and bass, maybe alternative rock, sent across the yard, where I’m hunched behind the flimsy curtain, the cold blowing into my bedroom.

It’s some asshole messing around, my friends say. Have another beer.

Maybe it’s someone here, I say.

They roll their eyes. They think I’m exaggerating. They pull me into the woods to pee. I don’t have to go so I hover nearby. I look right, then left. I glance behind me. They squat behind pine trees. The stream of piss is strong and I can smell it. I say, That missing girl said there’d been phone calls, she said there’d been notes.

But there was also a truck, my friend says from behind a spruce.

We run out of the woods toward the fluorescent parking lot where trucks idle and ravenous eyes skim over our  bodies. Unfortunately, everyone around here drives a truck. Black trucks, midnight blue trucks, evergreen trucks, garnet red trucks.

My father seemed overly concerned this evening—the uncanny resemblance.. He handed me a gift from underneath the Christmas tree. “I was gonna wait but…” he said. I unwrapped the gift to reveal a tube of pepper spray. “Don’t tell anyone you have it,” he said. “Keep it on your person.” Now, I finger the tubular container in my coat pocket. “Sonofabitch,” he said. “They’ll catch that sonofabitch.”

It starts to snow. A heavy dusting accumulates. The lot turns slick. Everyone starts skidding around like they’re ice skating. They lock hands and spin and suck on candy canes and barf up schnapps in dead bushes. I watch from afar, the black wall of woods at my back.

My best friends return to where I’m sitting.  They ask if I’m okay, why I’m not having fun, why I’m freaking out. They say, It’s just a harmless prank.

But all I can think about is her headless body.

The air smells sweet and smoky. A couple trashed guys rip the missing poster off the telephone pole and joke around about that girl, that missing girl, and how famous they’d be, how lucky they’d be not to have to go back to school, to endure cold tater tots, homework, gym class. My friends want to go back to someone’s house for a backyard bonfire.

I’m already burning as the two heartless idiots crumple up the  poster and toss it into the woods.

It’s the sort of town where things aren’t taken too seriously, the sort of town where things like this don’t happen. But you know how it goes. Later, they’ll say things like, I saw a black truck parked by her house, or maybe it was evergreen, perhaps midnight blue. It was definitely dark, they’ll say. But they’re never sure. They’ll say they thought it was no big deal, being so close, they never thought it would happen twice.

Jenn Powers is a writer and visual artist from New England. She is currently at work on a psychological thriller. She has work published or forthcoming in over 70 literary journals, including Hayden’s Ferry Review, The Pinch, Jabberwock Review, Thin Air Magazine, Calyx, Spillway, CutBank, and Lunch Ticket. Her work has been anthologized with Running Wild Press, Kasva Press, and Scribes Valley Publishing, and she’s been nominated for the Pushcart Prize and Best of the Net. Please visit www.jennpowers.com for more information.