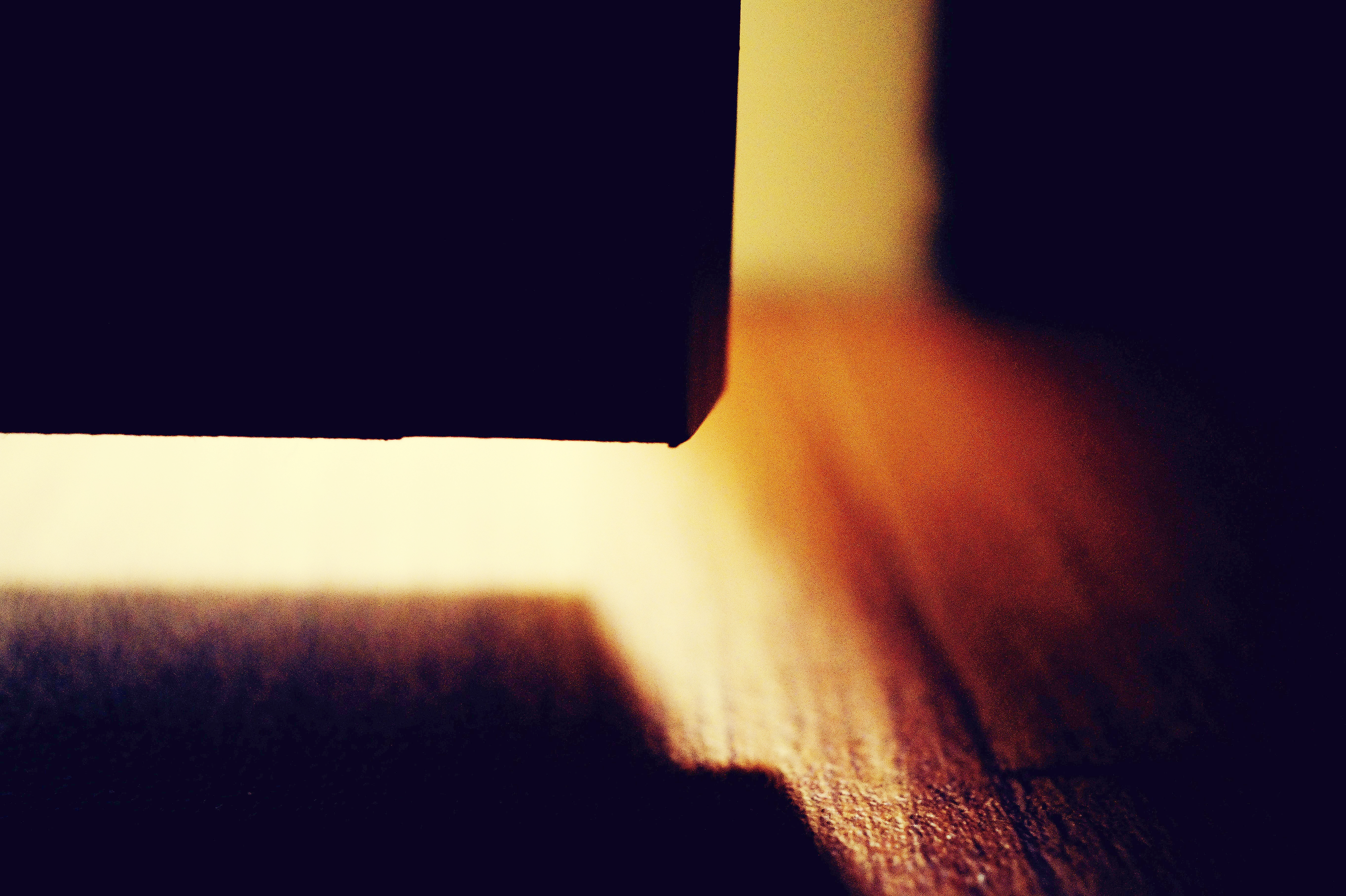 When I’m grown up, I won’t be afraid of anything. She whispers, digging her toes into the mattress, her body rigid under the daisy printed quilt. She’s sweating but is too frightened to push it off. There’s nothing in her room that scares her, but there is a knife-edge of light under her bedroom door and on the other side is where the bad things are. In the still-bright living room she knows the sounds and footsteps are not her parents, but monsters, or rather, she knows that that is what her parents really are.

Underneath her mother’s obsession with homemade yogurt and her father’s addiction to the weather channel, they are something… other. And she is only safe if she plays along. She’s not exactly sure how she knows this; sometimes her mother’s soft brown eyes go sharp as pencils or she sees her father’s hand squeeze so tight his knuckles pop, but it’s simpler than that. She knows and so when she has to pee she stomps across the carpet and rattles the doorknob so that they have plenty of time to stop doing monster things. She never has sleepovers.

One night there are bad sounds from the living room, like road kill under car wheels. She’s got the cold pin-sweats and her nylon Barbie nightgown is sticking to her back. She stumbles toward the door (her need to end the fear almost big enough to eat the fear itself) until her feet are peeking into the wash of light. She hears something pacing up and down making a hollow whistling noise, knows this is her mothermonster. Farther away is a tearing sound, a crisp snapping; that is her fathermonster. Her mothermonster seems to be coming nearer the door, but her toes are frozen, gripping the carpet. She stays absolutely still, even though she can feel the tearing sound under her fingernails, even though she knows her mothermonster can smell the fear dripping down the backs of her legs. She reaches out and grabs the doorknob, feels the slight resistance of a hand on the other side. She knows that you can die of fright, but when the hand releases and the whistling breath moves away, she only drops to her knees and buries her face in the rough carpet.

In the morning her mother is pouring cereal, brown hair falling across her face. For a second they lock eyes in the morning quiet.

“You know, don’t you?” And it is her mothermonster’s empty whistle. Her eyes widen a little, but she pours milk over her cereal, keeps her voice steady:

“Know what?” Her mothermonster keeps staring, eyes narrow, but then smiles.

“Good.” The word is long and slow, but then it snaps back and is just her mother’s normal voice: “Now eat your breakfast. Don’t want to be late for school.”

She hears in class later that the girl who sits next to her… her almostbestfriend, is missing. She does not think about the snapping, ripping sound, puts energy into math homework and forgetting. They never find the girl.

At fourteen, her mother catches her kissing her friend Amy, rounds on her with a voice like brakes squealing. Her feet are digging into the same old carpet, and for a second her mother is not her mother and she thinks she hears a sound from the other room though her brain refuses it, but it’s over almost instantly and Amy is gone and her mother is sighing, pushing fluffy hair out of her face and using her gentle voice:

“Never again. Never.” They say that Amy hopped a bus and ran away. It never happens with anyone else.

Away at college she’s playing a drinking game and someone asks: “worst fear when you were a kid?” She says spiders. It’s hard to make friends and have secrets.

But sophomore year she meets a girl who is loud and funny and who keeps grabbing her by the hand to pull her onto dance floors and out to concerts and finally into bed. She does not realize until the girl is naked, curled warmly around her back, that this is the first time she has felt safe since she was seven years old.

“You’ve got to tell your parents sometime.”

“Babe. They’re… they’re really homophobic. They won’t like it.” And it’s all true, but not the whole truth. Her now fiancée pulls her into a hug.

“Ok.” And of course she knows her parents aren’t monsters; she can tell the difference between a kid’s bad dream and reality, but she still feels the shiver of tearing and snapping underneath her skin, still dreams of that second when her mother was not her mother.

Dinner hums. A calm surface. Her mother’s face goes strange when they make the announcement and she stands abruptly:

“Honey come help me with dessert, ok?” She squeezes her fiancées hand, goes to the familiar kitchen. Her mother grabs her by the shoulder, swings her into the wall.

“You tell her to leave. Tell her you don’t want to see her again. Your “wedding” is off. Understand?”

“What? What the fuck do you mean? You’re crazy!”

“Why would I?” She feels sharp, familiar sweat on her back, body going rigid under her mother’s hand.

“You know.” And it is her mothermonster’s voice that she hasn’t heard in years, but she is grown up and she is not afraid of anything and she knows what it means to feel safe.

“No.” She shoves away from her mothermonster. “No. I won’t. We’re leaving and if I don’t ever see you again, fine!

“Do it!” The voice whistles higher, less and less human. She knows this can’t be real, pushes back:

“No!” Her mothermonster makes a sound, a call that runs through her: fear distilled down to perfect potency. From the dining room comes the sound of tearing.

Author Bio: Kate Tooley is a writer living in Brooklyn with her wife, pets, and a collection of dying houseplants. Originally from the Atlanta area, she is currently pursuing an MFA in Fiction at The New School. Her writing can be found online in Longleaf Review, X-R-A-Y Literary Magazine, The Inquisitive Eater, and others.

q+1 Issue: The Buzzer
Back to News