by The Lamp of Diogenes 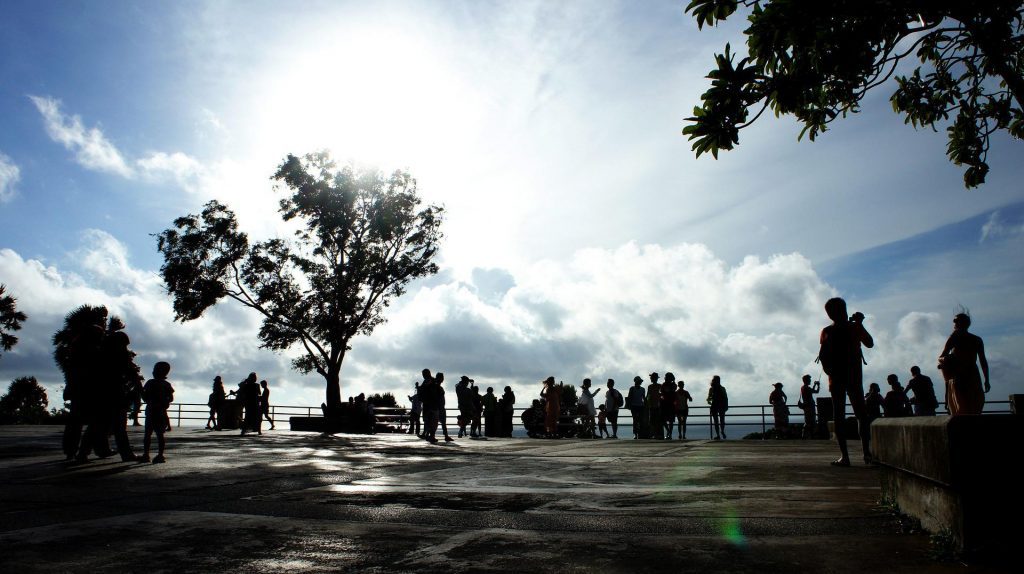 1. On an old hand me down iPhone with the broken microphone, on which a call is a one way broadcast with the possibility of conversation broken from the start. This not-phone is in Bang Na, Krung Thep, an other city of Angels. When the mid-day thermometer reads 39 degrees Celsius, without air con, and humidity has turned high, and it feels more like being in a brick oven with steam. By the spiffy outdoor basketball court with balls bouncing towards drone parents on bleachers, some conspicuously dressed as if they were beside the latest drop on a fashion runway, not even close to dropping any sweat sitting court-side, while their kids simultaneously drip exhaustion, wealth and Asian power. They cannot muster the concentration nor energy to drop a basket in the extreme tropical summer heat at noon. As one of the kids’ bodyguards looks up from his broken phone to check in on his charge.

2. On your iPad propped on-top of Paris Cafe’s coveted white marble corner table on a busy Saturday afternoon where you came to hang out with the French pastries, whom, like you, need air conditioning to survive. Beside the couple at the next table who, for over 30 minutes, ignored their food in order to style: 1 coconut cake, 1 Lotus croissant, 1 truffle croissant, 1 tiramisu cafe, 1 melt in your mouth Parisian raisin pastry. All for their insta feed. Sunday is ok to read Hannah Arendt. But the corner table is occupied. A couple whose entire existence is an innocuous contrast to those who were there yesterday. Instead of a phone camera, a crochet hook is wielded by the lady next to me. Her deft hands are busied by merging real things together. Two yarn threads, baby blue and peach, are becoming something meaningful, and growing longer with every single, methodical stitch. Across from her, a husband, partner, boyfriend. Her somebody. He is sitting half crisscross applesauce style (no shoes, one leg up on chair) while glaring down at his phone to track down data, which every few moments his eyes shift to the other big screen he is facing. He puts down his phone so each finger on both hands can be readied to enter something important into the spreadsheet, reflected in the mirror behind him. This all happened on a quaint, very large old style laptop. At one point, maybe 10 years ago, it must have been a desired purchase, a top of the line, fast machine. In between, at the end of her line, she interrupts his scowling and her crocheting, to lovingly feed him with a shared fork the one truffle croissant they ordered. Unlike the beautiful insta couple who sat at the same table yesterday, consumed more by their feed than reality, who only took one skimpy bite from each plate before leaving it all behind, so the server, who is not an immigrant, a thousand miles from Paris, could magically appear and throw the rest away.

4. When you have anything to do that day that involves anything involving your brain.

5. In an open window behind the zoom screen while others are speaking. (And no, I never tried this, during a recent writing workshop with fellow thinkers on this earth; just know it would not be good for my soul.)

6. Where anyone who is deeply suspicious of thinkers might see you.

7. Anywhere there is casual surveillance of absolutely everything that everyone is doing at all times—shopping malls, beaches, parking garages, red lights, intersections, my house.

8. In Central Park on a beautiful day.

9. At a disco, or anywhere with a mosh pit and/or lasers and/or DJ.

10. In Florida or Gilead. Especially not with The Mayor. The tattooed philosopher with a perfect penchant for thinking and remarkable recall, who is running down a street screaming “read this to save your life” as he flings leaves of Totalitarianism at all those who happen to pass by.

11. While watching or listening to the Supreme Court [interrogation] Hearing.

12. While watching or listening to stories about feeding the people in Ukraine right now.

13. In Lumpini Park, layering public space and history across space and time, to celebrate the birth of the Buddha. The beauty flanked on four sides by jammed streets filled with motorcycles, and grab delivery bikes weaving themselves amongst the alphards, tuk tuks, cycles and the homeless. In one corner, a remarkable public monument of Royal Portraiture, admired by all those going up and all those going down.

14. In Ayodhya, where they want to build and celebrate the glories of a kingdom, raiding money from those who seek peace from the clawing guilt of leaving their homeland. They identify with Lord Ram, like him, they feel they live in a perpetual exile.

15. Not at the Guggenheim, or Louvre in AbuDhabi, nor anywhere near World Expo.

16. Not on Sentosa Island, where it’s all fun and games to escape from reality.

17. On a device in the Philippines that has the tracking function on.

18. On a street in Yangoon, Myammar (formerly Rangoon, Burma), which the British lost. Lost? Lost. Where that famous Bengali, George Orwell once roamed the streets as a police officer, long after his maternal grandfather tried to sell teak.

19. Anywhere that your reading materials may be considered conspicuous or seditious, or, identify you as an enemy of lost causes.

20. Can’t say the other places; I would get into a hot mess for even thinking those possibilities.

Author Bio: The Lamp of Diogenes. Lamps illume. These words needed to be said out loud. There are words that one is not meant to say out loud. There are thoughts that one is meant not to have. Bearing witness is a risk. Reading and writing can be dangerous acts. Risks and acts not everyone can take, but, sometimes, should take with precautions. And, what can look innocuous on one side of the earth, is not so, in a different space. Occasionally, day becomes night. Identifiers have been stripped. Delete and remove all tags. Everything. Not everyone is about fame and name. We have become fearful of thought and thinkers. The lamp of Diogenes seeks humanity.

If you would like to submit original art for the print issue and/or feature online for this essay, check out our art contest at bit.ly/asianvoicesart, running May 1st-July 1st, 2022.