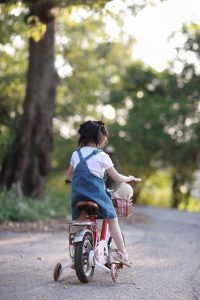 My sons and I amble down the sidewalk, soaking in the sun. My six-year-old son’s hand rests securely in mine, fingers comfortable, grip easy. My three-year-old son’s hand feels foreign to me, cool and awkward. I am hyper-aware of every shift of a finger, every change in pressure, like holding hands with a stranger. He is a stranger, really. We only adopted him from Korea a month prior, the attachment still tenuous and new, the trauma fresh for us all. After a long process and a nesting period at home, we were finally appearing publicly in our neighborhood.

A woman walks towards us, a generic white face with no name, part of the scenery of suburban America.

“Who is this?” she asks enthusiastically.

“This is H,” I say, stating his name quickly and shuffling my feet forward, trying to keep moving.

“I didn’t know you had two sons. I’ve only ever seen you with one,” the woman said, smiling at my older son, also adopted from Korea.

“Yeah. He joined our family recently.” I lightly pull my sons forward, instinctively trying to protect them from the obvious direction of this conversation.

She pauses. Gears turn. “Oh! He’s adopted! Where is he from?”

Every Asian American has been asked some version of this question before. We respond with the name of some American town and they respond with, “Yeah, but…” until our foreignness is sufficiently sussed out. We watch the fault line crackle open, us on one side, them on the other, and toss the interaction into the pile of microaggressions our identity sits upon. For adopted Asian Americans, like myself and my two sons, this question carries added layers of confusion and pain. When we are asked these questions for the first time independent of our parents’ white privilege and enthusiastic pride, we feel surprised when our skin bristles, not understanding why we are upset, having had no Asian parent or sibling to give us a vocabulary for what we are feeling. And even deeper than the complications of our transracial upbringing, the question asks for an answer that hits at our most primal pain. We are not simply from Korea, we are exiles from Korea. Korea sent us away, refusing to care for us, banishing us, stripping us of our citizenship, and removing all the ways we could be identified as a Korean, except for our face. And it is this last vestige of Koreanness that invites this question.

The clearest memory of my first “where are you from” story comes when I was fifteen. A friend invited me to a Jewish Youth Group dance, something my Jewish parents were thrilled I wanted to attend. The questioner was a tall, Sephardic boy, his tan skin glowing, and his dark eyes bright. It took three iterations of the question before I answered the way he wanted me to, the way that would allow him to tell his friends a logical punchline to the joke of the Asian girl who walked into a Jewish dance.

The question followed me closely as I moved into adulthood. I began anticipating it, accelerating the interaction, giving the questioner what he wanted right away to spare us both the time. Once, I had been tasked by the partners at my law firm to take our newest summer law clerk to lunch on her first day. As we sat waiting for our overpriced pizzas in silence, our eyes met. We both smiled.

She said, “So, where are you from?” I did a quick calculation. She was white and from the Midwest, I knew what she was asking and I wanted to get this over with.

“I was born in Korea. I was adopted. My parents are Jewish.”

A moment of hesitation.

“I just meant where you grew up.”

Sometimes the question does not have any subtext, but there are no codes for when it does and when it does not, and that is the subversive burden Asian Americans must carry.

The question took on a new meaning when I left the law firm and joined a family law legal clinic, where I had mostly minority clients, many of them immigrants. The question became a different type of judgment now, out of the hands of the white majority, and into the hands of the brown minority. My clients asked the question not to make me feel different, but to judge if we were the same. One of these clients was a Filipino immigrant trying to divorce her husband. She asked me the question after our first consultation.

“I grew up in America, but I was born in Korea,” I answered.

A smile broke out on her face. “Ma’am, you understand me then. Yeah?”

I guess I did, in a way. I understood how hard it is to live in a country that is not yours and one that does not live up to the promise it gave you when you came. When her divorce was finalized she left a tin of expired nuts and a note at the front desk for me. “Thank you for your help, Ma’am,” the note read. “I am so glad it was you who helped me. We are the same.”

And so this question continued to follow me, sometimes a sword, sometimes a token of friendship, and sometimes an innocuous throwaway. It was not until I went to Korea that I learned that the question could be translated to other languages. After a day of walking up and down the steep streets of Busan, the place I was born, my husband and I were almost at the train station when the smell of roasted sesame seeds wafted out of a dark alley straight to my husband’s nose. His eyes lit up and I silently turned right and trudged down the alley to a small alcove where a man sat on a crate, roasting sesame seeds and pressing them into oil. My husband approached him, big smile, white skin.

“Annyeonghaseyo? Eolmayeyo?” My husband’s effort at speaking Korean by asking the cost of the sesame oil made me smile and cringe. He was the official Korean spokesperson for this trip, my white savior embarrassing himself to spare me from my own shame of looking Korean but not speaking the language fluently.

The man looked past my husband to me, to the hideout I had staked on the other side of the alley, trying to avoid his eyes. “Hanguksaram,” he asked, pointing at me, inquiring if I am Korean.

I shook my head and crossed my hands like an “X.” Since being in Korea, I had never felt less Korean.

And there it was. The question in Korean. Where are you from?

In her poem titled, “Where are You Really From,” from her book Cleave, poet and Korean Adoptee Tiana Nobile writes about this question. She lists with succinct power the names of various cities in America that could adequately respond to this question. “Nameless, Tennessee. No Name, Colorado. Nada, Texas. Nothing, Arizona.” For transracial adoptees, the question is more than just about racism and foreignness, it is about the elemental pain of being born from women who are lost to us, from countries that rejected us, and raised in spaces that do not see us. Where do we come from? We often feel like we come from no one and from nowhere.

Standing on the sidewalk with my sons, I stare at our neighbor who is asking me the question that has haunted me for so long. I have four little brown eyes staring at me, absorbing my reaction, their neurons turned to record. I want whatever I do to convey to them that we do not need to answer this woman’s question unless we want to. I want them to know they are from the body of Korean birth mothers, the hands of Korean foster mothers, and the embrace of a community of Korean adoptees, including their mother, who loves them no matter what answer they decide upon. And I want them to know they come from two countries, both beautiful and complicated in their own ways, and that they have the right to accept or reject ownership of either or both.

I pick up my younger son, holding him tightly to my body, his frame melting into mine for the first time in our young relationship. I squeeze the hand of my older son assuredly and I look directly into the woman’s eyes.

“Oh, I didn’t mean…nevermind. Well, congratulations. Have a good day.”

As we walk off, the question walks off with her, unanswered but satisfied. 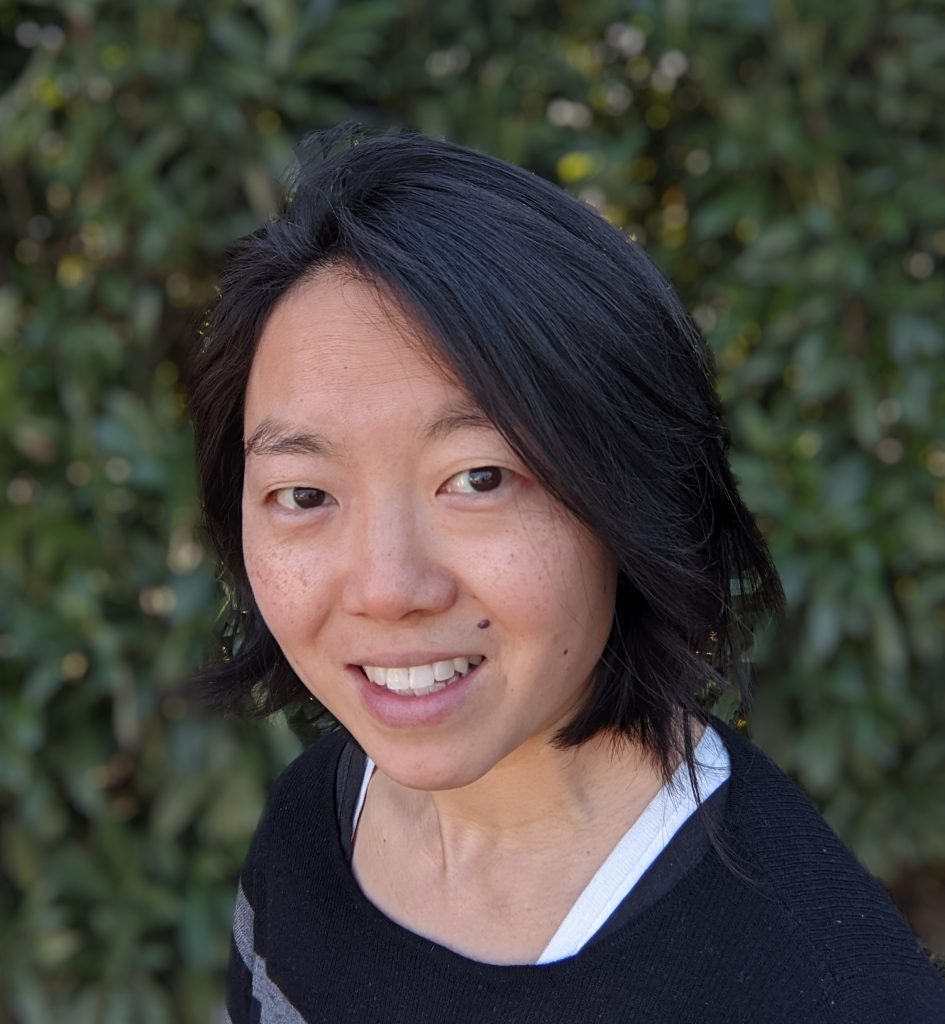 Born in Busan, South Korea, and adopted by Jewish parents, Cynthia Landesberg grew up in the suburbs of Washington, D.C., where she still resides. She left her legal career in favor of caring for her three children. She currently spends her days homeschooling her sons, chasing her baby daughter around the house, and spoiling her dog with a lot of walks. And in the moments in between, she writes. You can find more of her writing at adoptionsquared.com.

If you would like to submit original art for the print issue and/or feature online for this essay, check out our art contest at bit.ly/asianvoicesart, running May 1st-July 1st, 2022.